Alan is an award winning songwriter, successful recording artist and nationally recognized speaker on grief and loss. In July of 2010, he was named the Professional of the Year by the Board of Directors of The Compassionate Friends, the largest organization in the world helping bereaved families.  In 2011 Alan received the Humanitarian of the Year award from the Bobby Resciniti Healing Hearts Foundation. 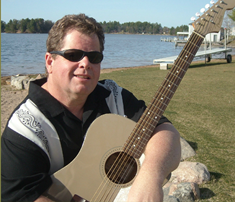 As a former Nashville songwriter, stand-up comedian and network radio news reporter, Alan has over 30 years of experience writing, performing and producing all genres of media.

On August 15, 2001 Alan’s life was changed forever.  Ashley Marie Pedersen, his oldest child and only daughter, died as a result of an automobile accident.

Alan has turned his journey through the valley of grief and the pain of loss into a collection of powerful and moving songs recorded on to 4 highly acclaimed CD’s.

His music is popular with bereaved people around the world and has been used at thousands of candle lighting services, balloon and butterfly releases and by hundreds of professionals and organizations as a healing tool for the bereaved.

Alan performs at the annual Bobby Resciniti Healing Hearts Charity Dinner every year! He also co-facilitates a one day grief workshop the week before or after the dinner.Alan has been a keynote speaker and workshop presenter at many prestigious conferences including: The World Gathering on Bereavement, The Compassionate Friends National Conference and The National Gathering of Bereaved Parents of the USA.

Alan has written many articles on grief that have been featured in national magazines, newsletters and other publications. He has been a recurring guest on Healing the Grieving Heart on the Health and Wellness Radio Network.

Stories about Alan’s music, message and travels have been featured on television and radio stations around the country, and have been the subject of countless newspaper articles.

His music and message have earned the highest respect from many of his peers who have shared the platform with him.

Darcie Sims, Ph.D., CHT, CT, GMS… says: ”An evening with Alan Pedersen is an experience like none other.  He will make you laugh, he may make you cry, he will surely give you some things to think about, but most of all you will be gently guided to that most sacred and healing place of sweet remembrance.”

Dr. Gloria Horsley Ph.D., President of Open to Hope Foundation, and Host of Healing the Grieving Heart Radio Program says: “Alan’s music and message are a light in the darkness to those going through grief and loss.  His message is one of hope, his humor puts you at ease, his music is powerful and helps us remember those we have loved who have died”.

Alan is a friend of our foundation and we encourage you to purchase his music CD’s – they will sing to your soul!

You may purchase the MP3 version from Amazon