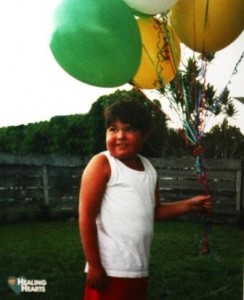 11 years and several operations later, Jesse was then approved to be a heart transplant recipient in January of 95, but his second chance at life was not to be, as on December 27th of that same year, Jesse went into cardiac arrest –  loss of oxygen left him brain dead -and was taken off life support on Dec 30th 1995.

Jesse had a wonderful 12 years despite it all, and mainly because his parents made his life fun as well. Jesse wanted for nothing except a new heart, and was brought up with so much love and affection from everyone around him. He had a beautiful smile, and when he hugged you he sunk his fingers into you, so you knew he meant it.

He too is missed, but will never be forgotten – Written by parents, Carol and Jack Kane

Click here to light a candle for Jesse – send him your LOVE!