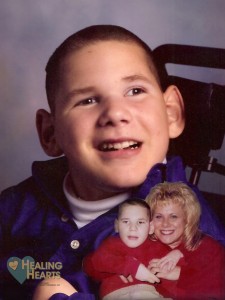 Brandon was a special young man born February 25, 1991. He was born not breathing and blue. Over 12 lbs at birth after 40+ hours of labor and a c section. His life was  struggle for him as he got older. His medical conditions worsened and he was always sick with some kind of respiratory infection. On Feb 3, 2008, he was with his father.

His father called me to say I better come to the hospital as Brandon was not doing well. I knew right then and there that Brandon would not be with us for long. My friends rushed me to the hospital and there lay Brandon. The Doctor said his organs were shutting down and we needed to make some decisions.
That was the longest week of my life and the shortest. Too short because it was the last week I spent with my son. He seemed to improve during the week but took a turn for the worse on Friday evening and from then on was not alert. On Sunday, February 10, 2008, My friend Arlene and I were holding Brandon’s hands in his hospital bed as he took a gasping breath. This was the beginning of the end.
About a minute later he started breathing again. He held on until his father returned to see him for the last time. He died peacefully in our arms February 10, 2008 a little after 4:30pm. A strong courageous boy who loved life and his family. He will always remain in our hearts.
WE LOVE YOU BRANDON!

You are missed – love always – Mom