Caleb Robert Whan, 3 years old, was complaining of leg and arm pain in August of 2007. Although there was no visible fracture on the x-ray, Caleb was put in casts on his right arm and right leg. A few days later his left leg hurt. Finally, blood work was ordered which revealed leukemia.

10 days after Caleb’s diagnosis, he was further diagnosed as a high risk case, called Hypodiploid ALL. This sub-type of Leukemia is extremely rare with only 8 to 10 diagnosis per year with a success rate of only 15% to 20%.  Caleb was immediately placed on a protocol that included a Bone Marrow Transplant which he received at Duke University in November of 2007. The transplant was best described as textbook. Caleb engrafted in record time and had minimal side effects from the chemotherapy and total body radiation. Caleb and his family had to relocate to Durham, NC for over 4 months.

Caleb relapsed on, March 10, 2008, the family found out just 4 days after returning home to Florida from Durham, NC. There is no protocol for a patient who has relapsed so close to a Bone Marrow Transplant. As a family, they were forced to place their 3 year old son in Hospice Care and pray for a Miracle.

On March 27, 2008, Caleb’s doctor ordered an MRI for some pain issues. Caleb had to go under general anesthesia for the MRI. Caleb’s oxygen saturation dropped and he was placed on a respirator. The doctors told them when they pulled the tube he would not be able to breathe on his own. The family made the decision to pull the tube and let God’s will be done. Caleb was able to breathe on his own and he was able to go home. When Caleb got home his breathing was extremely shallow. The family all huddled around him to pray, try to get him to talk, open his eyes, and smile. There were some moments where he was responsive to the attempts. One of which was extremely special to the family. Rob was by Caleb’s side and told him “I love you Caleb” but got no reply. Rob got a little closer and told him “I love you, Baby” Caleb opened his eyes, looked at him and whispered “yuv you”. These were his last words. Later that night, on March 28, 2008, at 4:30 AM Caleb took his last breath and went to be with God, this was only 11 short days after his 4th birthday. 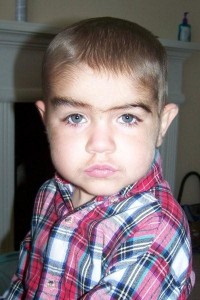