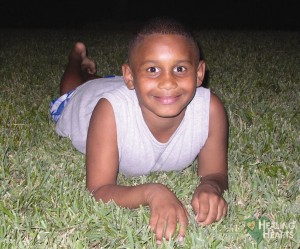 My life was blessed with the birth of my 3rd child, Carlos on March 7, 1998.  Carlos loved sports. He loved playing football, riding his bike, fishing with his uncles, and he was the captain on his basketball team.  He was definitely the funniest child I have ever known.  He loved telling jokes and imitating TV and movie characters.  He would do just about anything to get a laugh.  He was also the most loving child I have ever known.  He enjoyed spending time with his siblings and his niece.  Carlos always made sure that I was well taken care of.  After a long day at work, Carlos would make me sit on the sofa so he could rub my feet. He would massage until he started to fall asleep.

Tragically, on December 9th, 2007, Carlos was hit by a speeding car while riding his bicycle.  During the procedure to fix a collapsed lung, they found a split in his aorta.  He lost oxygen to the brain for 30 minutes during emergency surgery.  After two tests he was found to be brain dead.  Carlos was taken off life support on December 10th, 2007.  At that time I chose to donate his organs in the hope that through his senseless death, others may live.

In life Carlos was a blessing to me, and in death he is my guardian angel.

Following is a letter I received from the mother of the boy who was blessed with Carlos’ heart.