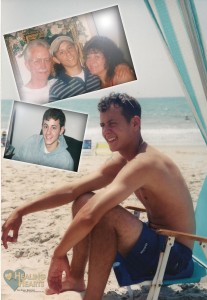 Matt was our 3rd born son, our baby. He was born 7 years after his big sister, Kerri and 5 years after his big brother, Todd. It wasn’t in our plans to have a third child… but it was in God’s plan. When we were deciding what to name him, we came upon the name Matthew … the name meaning…”GIFT FROM GOD.”

It was a joy to have Matt, as the other 2 went off to school that year in 1982. He was a delight from the first day we brought him home! He slept the whole night long and continued to do so every night! That first year he was an angel baby. He was so loved by his brother and sister as if he were a little doll baby. For me it was wonderful as I had him to myself… all day long!

As the years went by, Matt did very well in school and in sports. He gave his all in everything he set out to do. He was very much a family child.  He loved to hang out with us at home, just spending time together doing simple things. When he would go out with his friends or a girlfriend, he would always end the night by coming into our room and standing in the doorway and telling us all about his evening. We so miss all of those special little moments. Just watching TV together, eating meals together, cleaning up after, messing with his Dad all of the time, playing with his 4 nephews who he loved beyond measure, and spending time with his brother and sister.

He worked as a caddy at a Golf Club from a very young age. His skinny, but strong body carrying 2 bags for the golfers up and down the hills of the course. He worked also in a food store stocking shelves, anything to earn money to do the things he wanted to do and enough to buy a car and his own insurance. He managed to save a good amount, even after doing all of this.

He graduated from High School with high honors and prepared to go off to Penn State University in the fall of 2,000. That first year he made the Dean’s List and we were so pleased, so proud of him and his accomplishments. His second year in school he developed mono…. they said it was a fairly mild case and he would be fine. That year his grades went down and never came back to what he was able to do prior to that illness. He began to struggle with school work, didn’t feel well a lot of the time, and just wasn’t our Matt, as he had been. By his third year it got really bad and he began to have anxiety attacks … He asked to come home as he just couldn’t keep up anymore. We took him to doctors, psychologists, specialists, and nobody could come up with a right diagnosis to help him. He seemed to come around after leaving college, a little more the Matt he used to be…. but then he went back downhill … and more doctoring…He began to swell in his hands and feet and we rushed him to the doctors again. She did tests …all showed ok…. The doctor sent him to a specialist saying maybe it was rheumatoid arthritis… He was diagnosed with “maybe this” and put on meds. That was Easter time of the year 2005…. By early summer we went away for the weekend to my husband’s Vietnam reunion. That Saturday afternoon, June 18, 2005, we got a call from our son, Todd…. that our baby … our Matt was dead. His sister, Kerri couldn’t get a hold of him by phone that day, and went to the house and found him in his room.  An autopsy was done, which took 5 1/2 weeks to get the results…. they said it was viral myocarditis…. a virus which attacked his heart.

That phone call, that day, as we walked the beach in Virginia, changed our lives forever. Our family was broken, not ever to be whole again. We are still struggling, 4 years later to find our new normal, learning to live without our Matthew, our “GIFT FROM GOD”…. he was our baby, our gift for 22 almost 23 years….for some unknown reason God decided to call him home. We have to trust that there was a reason, and some day… we will know why… when we are reunited with him in Heaven. Until then we walk each day as best we can, loving those we still have, and carrying Matt in our hearts and thoughts every moment of every day.  We will love him until the day after forever….

With all our heart, soul and love,